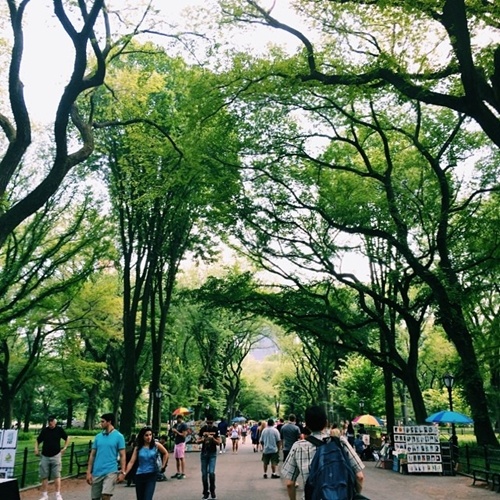 The Fragrance Garden in particular is great for those who need a little natural aromatherapy in NYC.

Seasoned travel therapists know that one great perk of the job is the ability to see and explore some of the best cities in the U.S. New York City is one of those destinations that lives up to the hype – towering skyscrapers, an amazing arts and culture scene and some rather interesting people make it a fun place to work. After you finish working with your patients for the day, here’s some of our favoirte activities in the Big Apple:

NYC is home to the best live theater in the U.S., so you shouldn’t miss this opportunity to take in a show. Grab a buddy, dress up and hit the town! Going to Broadway also means passing through Times Square, so you’ll get to do some pre-show people watching as you taxi to the theater.

One of the great things about Broadway right now is that there are probably more amazing shows than you have the time to see. There are long-running classics like Wicked and The Lion King, or your can check out one of the new hits such as Hamilton, Matilda or The Book of Mormon.

Enjoy some of the best pizza on the planet

You can’t spend much time in NYC without getting a big slice of pie. Pizza may as well be the official food of the city, based on how seriously the locals take it. Anyone you ask will tell you about a great place to grab a slice, so it’s probably worth checking out more than one restaurant. TimeOut magazine named Di Fara Pizza in Brooklyn as its No. 1 choice, with Rubirosa in Nolita and Keste in the West Village as second and third, respectively.

Stroll through the Brooklyn Botanic Garden

If city life is starting to get on your nerves and Central Park always seems too crowded, there’s another option for a peaceful stroll: the Brooklyn Botanic Garden. In this oasis of greenery, you’ll find over 200 cherry trees as well as other blooming plants. With 27 unique gardens, according to the official website, there’s a lot to explore. The Fragrance Garden in particular is great for those who need a little natural aromatherapy. There, guests are allowed to rub the scented and textured leaves. It’s an excellent way to recharge after a stressful week.

Put in your earbuds and pick a museum

There are so many great museums in the city that you could visit a new one every weekend. According to Fodor’s, the Metropolitan Museum of Art contains over 2 million individual works, including an Egyptian temple that dates back to the year 15 BC. If you’re interested in works that are little newer, you have to check out the Museum of Modern Art, which houses such masterpieces as Van Gogh’s Starry Night and Warhol’s famous Campbell’s Soup Cans.

Even if you’re in town for a six-month contract, you’ll never have trouble finding something interesting to do. Get out there and explore!