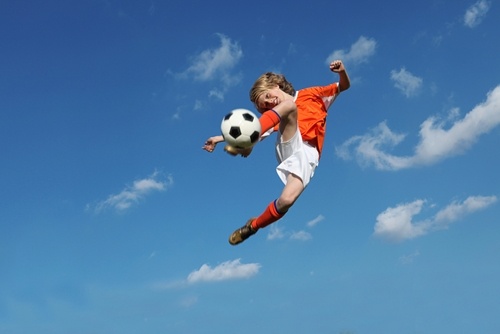 Soccer is one the best games to improve spatial awareness.

If you can properly parallel park or merge with traffic as you drive downtown, you can thank your strong spatial awareness skills for that. The ability to visualize math problems and see buildings in your mind’s eye can all be attributed to spatial awareness. It’s an ability we learn as children that we can strengthen with different exercises. While kids don’t have to worry about driving just yet, developing a strong spatial awareness is critical to their growth. Recent research has suggested that this ability is integral for doing well in math and science. According to ILS Learning Corner, there are social benefits as well. Kids with spatial awareness are able to better interact with others than those who don’t, as they’re able to determine the proper distance to stand from other kids.

Games are a perfect way to get them involved without making them feel like it’s work.

Since kids have a wide variety of interests, you can try out different toys and balls to see what they like. If they’re sports fans, kicking a soccer ball back and forth is a great way to strengthen their spatial awareness: Kids will have to properly identify the changing position of the ball as they play. For kids who want an additional challenge, you can ask them to bounce a volleyball against the wall at varying heights. As they hit the volleyball at different heights, they will have to adapt their perceptions of distance.

For some kids, the prospect of running with a ball – or any activity resembling a sport- sounds like a nightmare. Luckily, there are other options available. You can introduce songs like The Hokey Pokey for younger kids. For kids who want more of brain teaser, challenges like “I Spy” require them to use language to point out where they see different objects. For instance, pointing to a red ball and stating, “The red ball is on the top shelf.”

For kids who prefer tactile learning, you can bring back Legos and let them create different shapes. This “structured block play” gives them the chance to be creative while constructing structures big and small. (Disney has created Star Wars-themed kits that offer different structures for kids to build.) Working with these blocks improves kids’ ability to visualize mentally rotating different shapes.

We like the feeling of success we get when we make progress on a goal. Find ways to track improvements your kids are making. And don’t be afraid to reward them when they successfully complete a spatial awareness task! Creating an association between a task and a reward – otherwise known as operant conditioning – will reinforce the behavior, as research from the University of Cambridge has found. This can be very important if your kids have spatial awareness exercises they have to do at home.